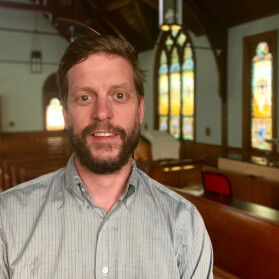 A native of Kentucky, Jesse graduated from the University Louisville and worked for small town newspapers before moving to California. It was there that he met the brothers of the Society of St. Francis, Episcopal (SSF). Jesse was a brother in that community for over 6 years, living in San Francisco, Berkeley and eventually moving to Long Island in 2009 to live and work at Little Portion Friary in Mt. Sinai. During this time he began his studies for ordination at the General Theological Seminary in New York City.

Jesse met his wife Meredith at the rectory of Christ Church, Oyster Bay and after prayerful discernment left SSF. They were married in 2014 and Jesse was ordained in December 2015. Before being called to St. Luke's, Jesse served St. John’s Church in Cold Spring Harbor as a curate for four years, where his family grew to include two daughters.

We are currently seeking to hire a new Organist and Choir Director.

8AM Holy Communion - The First Sunday in Advent

10AM Holy Communion - The First Sunday of Advent

9:30AM Meditation in the Library